The Internet Can’t Get Enough Of Madhuri Dixit’s Pic With SRK-Gauri, Salman And Shriram Nene 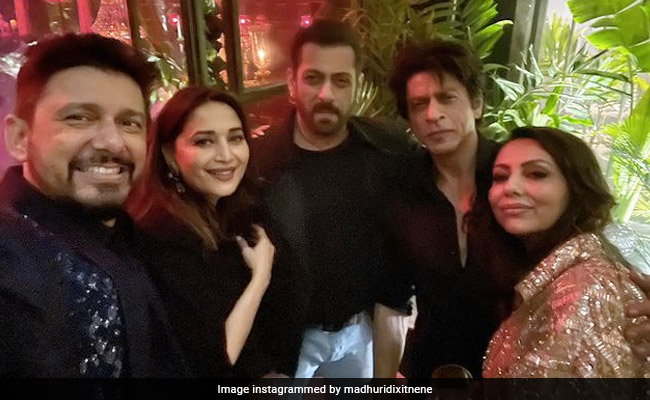 Alright, alright, if there is one picture from Karan Johar’s party that is iconic in every way, it has to be the selfie posted by Madhuri Dixit, which features some of the biggest stars in a single frame. In the picture, Madhuri Dixit can be seen posing with Shah Rukh Khan, Salman Khan, Gauri Khan and Shriram Nene. Madhuri worked with both Salman and Shah Rukh Khan in several films, especially in the Nineties and the early 2000s, most of which were hits. She famously starred with Salman in Saajan and Hum Aapke Hain Koun..!. With SRK, she worked in films like Devdas, Dil To Pagal Hai, Koyla, Anjaam, among many others.

“So much to talk about, right?” Madhuri Dixit captioned the post and rightly so. The comments section on the post was full of comments like “legends in a frame” and “Ahhh the Best pic ever.” Another fan added, “Precious.” Another comments read: “Best pic from the party.”

Shah Rukh Khan, who has been fairly active as a producer in the last few years, was last seen in 2018 film Zero, co-starring Anushka Sharma and Katrina Kaif. He has also co-produced Alia Bhatt’s Darlings, which marks her debut as a film producer. He also backed the standalone film on Bob Biswas, featuring Abhishek Bachchan in the titular role, which released last year. He will next be seen in Yash Raj Films’ Pathaan and Rajkumar Hirani’s Dunki. He will also reportedly star in Atlee’s next project.

On the work front, Salman Khan was last seen in the film Antim, directed by Mahesh Manjrekar, which also featured Salman Khan’s brother-in-law Aayush Sharma (married to Arpita Khan). He also announced the second installment of Bajrangi Bahaijaan. The actor’s forthcoming projects include Kick 2, with Jacqueline Fernandez and Tiger 3 with Katrina Kaif and Kabhi Eid Kabhi Diwali, with Shehnaaz Gill.