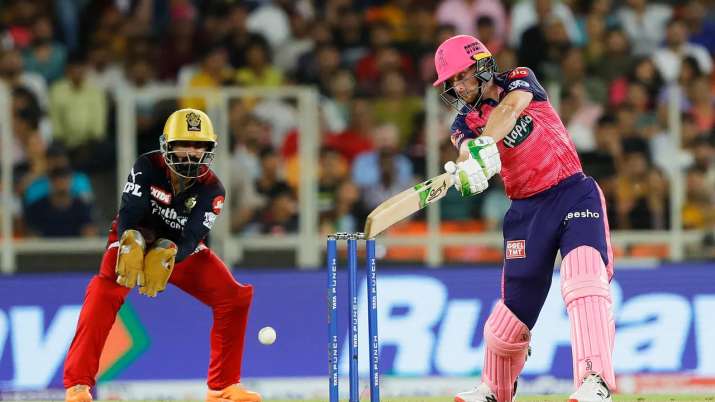 RR 161/3 after 18.1 overs: Jos Buttler smashed his fourth century of the season with 10 boundaries and six maximums and finished the game in style by thrashing RCB. RCB batting line-up collapsed and bowlers managed to take just three wickets. The Faf du Plessis-led team gave away the match in 18.1 overs with an underwhelming performance. While RCB’s wish for their maiden-title has yet again posponed for another season, RR will look to continue their momentum against GT in the final.

RR 126/2 after 15 overs: Jos Buttler continued to hammer bowlers by scoring boundaries and sixes. On the other hand skipper Sanju Samson (23 off 21 balls) lost his wicket to Hasaranga who scalped his 26th wicket of the season. However, RCB couldn’t pick any other wicket. Even though bowlers restricted runs during the last five overs, it looks visibly late for them to turn the tables. Team Rajasthan is on a roll and looks like they might end the game before 20 overs.

RR 103/1 after 10 overs: Rajasthan Royals came closer to seal the final-berth while RCB seemed helpless on the field. Jos Buttler smashed another fifty of this season in just 23 balls. Sanju Samson too supported him by adding important runs on the scoreboard. The Required Run Rate has fallen to just 5.50 as RR need 55 runs in 10 overs.

RR 67/1 after 6 overs: Rajasthan batsmen started their innings with a bang. Skipper Buttler and his fellow opener Jaiswal smashed sixes and boundaries to hammer the already under pressure RCB bowlers. Siraj gave away 31 runs in just 2 overs. After getting punished by RR batsmen, a slight moment of happiness arrived in the RCB camp after Hazlewood sent Jaiswal back to the hut. Buttler scored 45 off just 20 balls and took the responsibility of leading his side. Rajasthan Royals have made their intentions clear of not letting the momentum slip by registering 67 runs in Powerplay.

RCB 157/8 after 20 overs: Ashwin took crucial wicket of in form Patidar who smashed 58 of 42 balls. McCoy got his second wicket as he dismissed Lomror who managed to score just 8 off 10 deliveries. Dinesh Karthik who donned the role of finisher so far for his team, fell prey to P Krishna’s spell after scoring just 6 runs. Krishna continued with an impressive ball and bowled Hasaranga. In the last over, McCoy was back in attack and took Harshal Patel’s wicket on the first ball and gave just 3 runs in that over. Rajasthan’s bowlers restricted RCB at a score of 157. While RR will hope for their batters smash runs, RCB bowlers will have to take the onus of shifting the momentum in their favour.

RCB 123/3 after 15 overs: McCoy successfully trapped skipper du Plessis (25 off 27 balls) and sent him back to hut in the 11th over. RCB crossed the 100-run mark with Maxwell and Patidar’s brilliant batting. While Ashwin, Chahal and McCoy completed three overs each, Trent ended his four-attack by taking Maxwell’s big wicket who hammered 24 off just 13 deliveries. Patidar smashed a six on Chahal’s ball to get a half-century.

RCB 74/1 after 10 overs: RR have successfully restricted Bangalore at 74/1 with Ashwin, McCoy and Chahal’s spell. Skipper Faf du Plessis and Rajat Patidar have completed a 50-run partnership. While Patidar smashed his first maximum(86m) over long-on in Chahal’s first over, RR lost one lbw review against Patidar on Ashwin’s ball.

RCB 46/1 after 6 overs: Sanju Samson’s decision to field first paid rich dividends as Prasidh Krishna removed the dangerous Virat Kohli who fell after scoring just 7 (8b, 1*6). However, skipper Faf du Plessis and Rajat Patidar have rebuilt the innings to put Bangalore in a position of strength. While Patidar and du Plessis were lucky on a couple of occassions bith batsmen have nicely found their rhythm, playing shots on either sides of the wicket. Boult and Prasidh Krishna have shared six overs among themselves as Bangalore finished the Powerplay on a decent note.

Sanju Samson: We will bowl first. The wicket is a bit sticky and hopefully it will help our bowlers first-up. Yesterday we had a good practice session. Everyone is happy and excited for the game. Emotionally everyone is connected to the team and the franchise. Important to keep calm and cut off the noise, trust yourself and just another game of cricket. No changes for us.

Faf du Plessis: We were actually looking to bat first, it looks a good pitch and we believe runs on the board in a big game will count in our favour. Guys had a good rest yesterday, but today everyone has turned up really fresh and pumped up for the game. Tonight we are playing a very strong team and it is all about doing the right things. It’s an amazing ground, incredible to play in front of so many people. We are playing the same team.

Matthew Hayden: The (boundary) pockets are a little bit bigger. There are no cracks, got great even covering of grass and I expect batting is gonna be really good. Average scoring winning is 175.