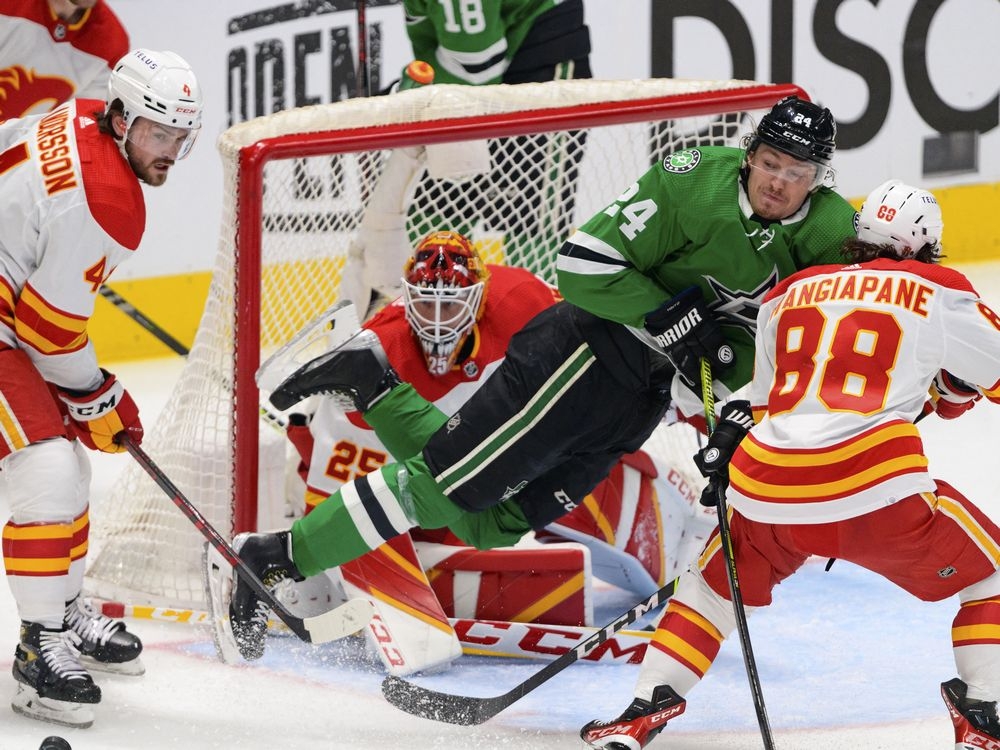 DALLAS — The handshakes are on hold.

This first-round showdown between the Calgary Flames and Dallas Stars is going the distance.

The Stars scratched out a 4-2 victory in Game 6, forcing a winner-take-all finale Sunday at the Saddledome.

It’s been seven years since the Flames last skated in the second round of the Stanley Cup playoffs. They’ll have to wait at least two more days.

“You gotta win a game,” said Flames coach Darryl Sutter in a terse post-game presser. “It takes a lot. Some guys are still learning how much it takes. I said it yesterday and I said it this morning. Same thing.”

Same goes Sunday. Except if you don’t win that one, your season is done.

The Flames, as the top seed in the Pacific Division, will have the luxury of last change and the backing of what will be a raucous C of Red. Puck-drop is set for 7:30 p.m. MT.

Seventh defenceman Michael Stone did his darnedest to avoid a seventh game, collecting a goal and an assist in the final date in Dallas, while Mikael Backlund had the other lamp-lighting for the visitors.

With Jake Oettinger doing that stand-on-his-head thing once again in the early stages, the Stars celebrated the lone strike in the opening frame. Roope Hintz was the triggerman, accepting a drop-pass from Joe Pavelski and sneaking a shot through Jacob Markstrom’s five-hole.

The Stars doubled the lead early in what turned to be a high-scoring second, with Joel Kiviranta dancing around Oliver Kylington and Michael Raffl arriving at the doorstep to deposit the rebound. That sequence turned from bad to worse for the Flames when alternate captain Chris Tanev, after tumbling over his defence partner on the backcheck, headed to the locker-room in obvious discomfort. Tanev would briefly return but ultimately missed all of the third.

The Flames have dressed seven blue-liners for the past three contests, which proved to be especially beneficial after Tanev’s exit.

Stone might have been the league leader in healthy-scratchings during the regular season — he totalled only 11 appearances from start to finish — but the spare defenceman is certainly making the most of his opportunity to contribute in this series.

He started to whittle away at Friday’s deficit, joining Johnny Gaudreau on an odd-man-rush and polishing off a superb pass from the superstar winger.

Four minutes later, just as a power play was winding down, Stone faked a slapper and instead teed up Backlund. Oettinger managed to get a piece of that shot but quite enough as the puck fluttered across the goal-line for the tying tally.

Stars smoothie Miro Heiskanen capped a second-period flurry — four goals in the same stanza … in this series?!? — with what turned out to be the game-winner. Heiskanen stepped around Matthew Tkachuk and scored through a mess of traffic.

Now on a rival bench as an assistant coach for the Dallas Stars, Stevens was sure of one thing as soon as this first-round matchup was set.

The Flames would be ready.

“The biggest thing I probably learned from Darryl was just how important preparation was — getting in the right mindset to play the game and thinking about details all the time,” Stevens said, reminiscing about his six seasons on Sutter’s staff with the Los Angeles Kings. “He probably pays more attention to preparation than any coach I’ve worked for previously, so it was a real lesson for me about how important it was.

“Especially in L.A., there are lots of distractions with the weather and everything else, and I think that had a real impact on our team.”

Certainly, all that preparation paid off for the Kings.

This spring, one of Sutter or Stevens will be headed home early. Sunday will determine that.

“The biggest thing Darryl brings to a team is aggression,” Stevens said earlier in the series. “He wants his team to be aggressive. He wants his team to hold lines. He wants to kill plays in his own zone. If anything, you just have to make sure your guys are ready for it. But they do some things differently. You can see some tactical things differently. Darryl is a smart guy and he has smart coaches with him and I think they’ve taken advantage of some subtle changes due to the personnel they have, but they’ve done a really good job of it. Look at their differential in goals-for and goals-against, special teams … We knew they’d be a tough opponent, and they have been.”

Of eight first-round series, five are headed to Game 7. Whoa … The Stars outshot the Flames by a 40-38 margin, the first time they’ve finished with the edge in that category … Markstrom made an incredible save in the third, stealing a sure-goal from Pavelski after a cross-crease pass from Jason Robertson. While sealing off the right post, the Vezina Trophy finalist flashed his left pad for jaw-dropping denial … The Stars were irate after a second-period hit by Nikita Zadorov on Luke Glendening, who needed help from his pals to leave the ice but later returned. They’ll certainly ask the league to take a further look …Sutter delivered a knee-slapper when asked after morning skate about how to handle a hostile environment as the road team. He insisted he’s simply thrilled that the rinks are full, no matter who everybody is rooting for. “I don’t care if they’re throwing beer on you or calling you a whatever. That’s still the best part,” Sutter said. “That’s the best part of it all. I still don’t know why guys pay $12 for a beer and throw it on you, though. Or $40 for a hat and throw it on the ice. I don’t get that one.”

Sign up to receive daily headline news from the Calgary SUN, a division of Postmedia Network Inc.

Thanks for signing up!

A welcome email is on its way. If you don’t see it, please check your junk folder.

The next issue of Calgary Sun Headline News will soon be in your inbox.

We encountered an issue signing you up. Please try again

Priyanka Chopra’s cousin Meera Chopra says sourcing clothes for Cannes 2022 was hard; reveals everyone wanted to give clothes to Deepika Padukone or a...